At present, sustainable water management is extremely important in both normal conditions (Seasonal rainfall) and drought conditions, especially in the arid area. To prevent water shortages in agriculture, industry and daily consumption, therefore, began to reuse and recycle residences wastewater to remain as an alternative water source for human activities. This can reduce scarcity. Reused wastewater may also be directed toward fulfilling certain needs in drinking water, toilet flushing, and irrigation of gardens. Water recycling and reuse are of increasing importance, not only in arid regions but also in cities and contaminated environments for economical use of water benefits before release it back to the water source. 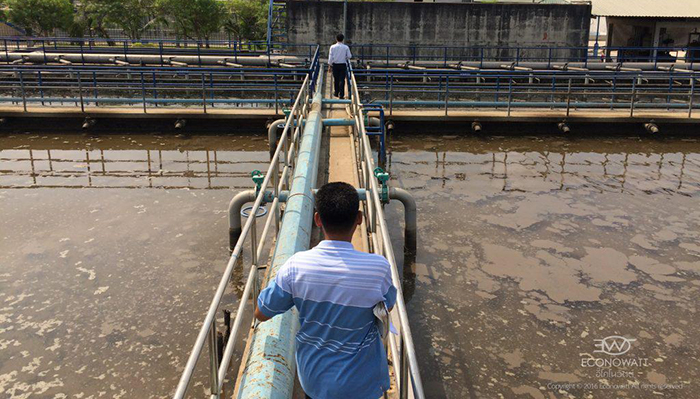 To maximize water used efficiency, ECONOWATT has combined the MBDAF® (Micro Bubble Dissolved Air Flotation) system with high-efficiency ozone systems together to reduce the use of water from natural sources, reduce water competition in drought conditions and Reduce water loss in industrial plants. ECONOWATT’s water recycle system with ozone disinfection is designed in full compliance with the rules are referred to EPA standard.

is considered as an innovation product. It has been registered in the Thai Innovation Accounts by the Bureau of Budget and has different capabilities from other systems such as

1. Eliminate up to 90% of Oil & Grease
2. Get rid of up to 70% of suspended solids (SS)
3. Reduce BOD and COD in insoluble form by up to 50%
4. Increase oxygen in the water Increase the efficiency of microbial systems
5. Automatic control, also known as Smart Water Treatment System, does not require staff to adjust the water valve. Reducing personnel to treat wastewater systems
6. Equipped with 4G monitoring system to check the operation of the MBDAF® and water quality, reducing time and maintenance costs. Allowing users to check the machine’s performance and water quality in real-time at any time on the mobile phone

After the water has passed the

® system to the output will separate in 2 parts.

Secondly, the free-oil & grease water after passing through

®, the suspended solids in water can be removed 70 % from the system before enters to next wastewater treatment process such as aerated system, fitration, etc before disinfected in ECONOWATT’s Ozone Generator.

ECONOWATT’s Ozone Generator which have ozone mixing efficiency up to 80%. Ozone is a very strong oxidant and act 3,125 times faster than Chlorine. It is commonly used to destroy bacteria, kills viruses, decolorizes and eliminates odors. Ozone is no residue, no carcinogenic and friendly environmental. Unlike Chlorine, when react with organic compounds in water will produced THMs (Trihalomethanes) one of occupational carcinogens.

​Compare Recycle water before and after using ECONOWATT’s recycle system